Head Coach Mark Scannell is in his third year of coaching at Covenant. He has spent the last 9 years coaching and is also the Senior Director of Coaching for Evolution Select Soccer Program. Mark played at a professional level for Shelbourne FC in Ireland. He holds a UEFA B Coaching License as well as UEFA Youth Certificate/FA Level 2, and FAI Kick Start 1 & 2. 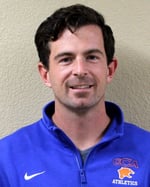 Mark’s goal as a coach is to build teams where everyone embraces the grind of progress and supports each other as effort compounds to build great things.