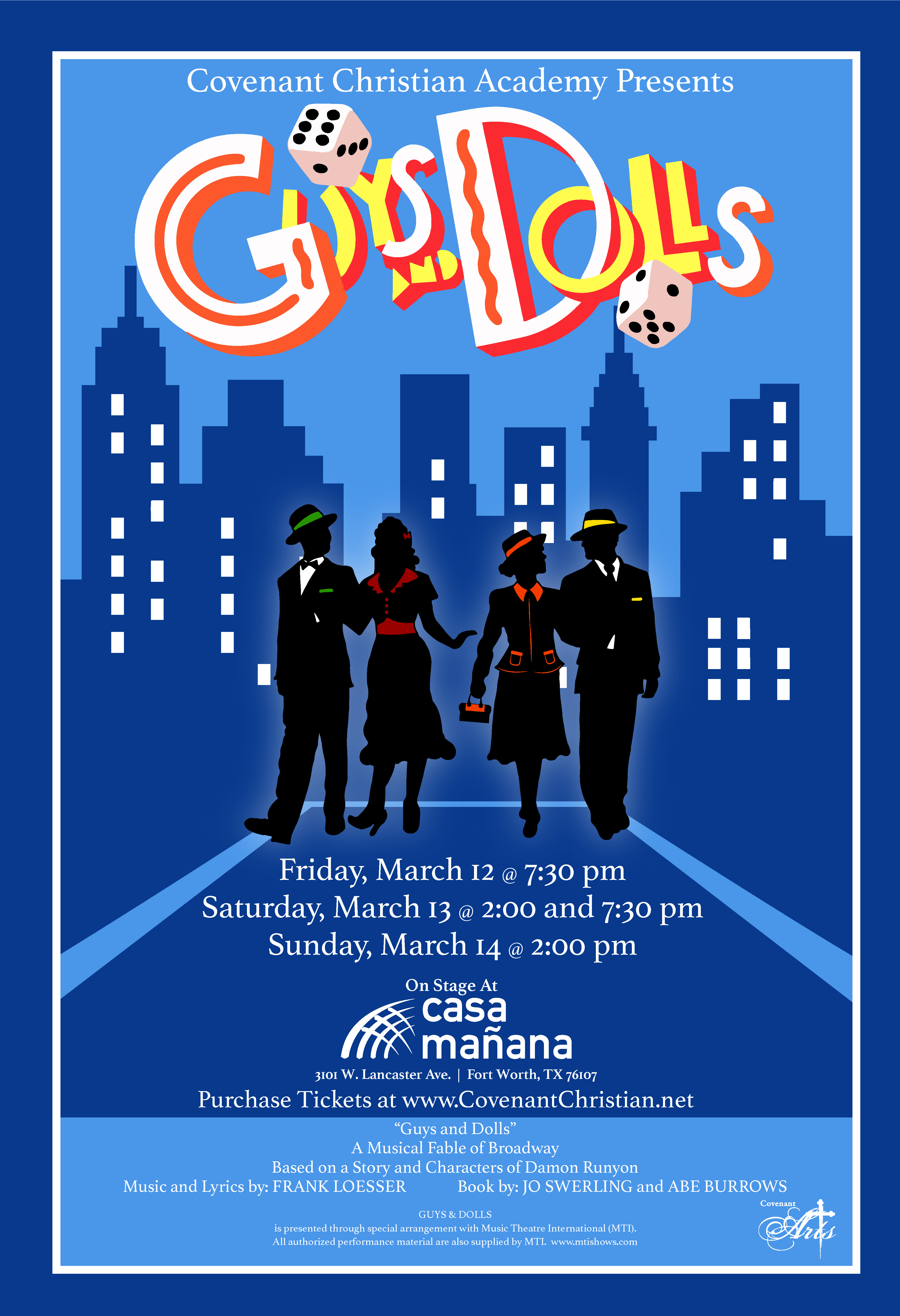 A Musical Fable of Broadway

Time Magazine once heralded Guys and Dolls as “the greatest of all American musicals!”

Covenant is thrilled to announce that we will present this show at downtown Fort Worth’s iconic Casa Mañana theater!

Seating will be appropriately distanced to maintain Covid-19 CDC protocols. Audience members will be required to wear a face mask while entering, exiting, and throughout the show.
Tickets go on sale Thursday, February 25
Friday - Sunday
March 12-14,2021
at Casa Manana, Fort Worth
Purchase Tickets HERE

Guys and Dolls is based on the short stories and columns of Damon Runyon, who wrote about the grittier side of Broadway – filled with hustlers, gamblers and all sorts of people doing whatever it takes to make it in the Big Apple. It tells the overlapping stories of high-roller Sky Masterson, who falls in love with mission worker Sarah Brown, and loveable rapscallion Nathan Detroit, engaged for 14 years to Miss Adelaide, a headliner at the Hot Box Club. Songs like “Luck Be A Lady” and “Sit Down, You’re Rockin’ The Boat” have become part of the great American songbook. Set in 1950s-era Manhattan, Nathan Detroit is searching for a new place to hold his illegal but notorious crap game, but he needs $1,000 to pay a garage owner to host the game. Nathan bets Sky Masterson $1,000 that he can’t convince a girl of Detroit’s choosing to go with him to Havana, Cuba in the next 24 hours. When Sky agrees to the bet, Nathan chooses evangelist Sergeant Sarah Brown, head of Broadway’s Save-a-Soul Mission. As far as Detroit is concerned, he’s made a bet he can’t lose. Despite some resistance, Masterson sets out to get Sarah to Havana by negotiating a date in exchange for bringing people into the mission. While Masterson woos Sarah, Detroit has to deal with his longtime fiancée, Adelaide, who has decided it’s time they should get married. Sky’s efforts to woo Sarah are so successful that he falls in love with her himself. Guys and Dolls demonstrates the great lengths to which a guy will go when he truly falls in love with a “doll.”

GUYS AND DOLLS is presented by special arrangement with Music Theater International (MTI). All authorized performance materials are also supplied by MTI.